Broad Street Baking Company, located off I-55 is a lovely establishment with a varied menu. Our favorite thing there used to be their home-made pimento cheese. We would buy it by the bucket-full. OK, by the pint, but still. We loved it. We would eat it both cold on crackers or bread, or slather it on some of Great Harvest's bread, or sometimes Kroger's french bread baguettes. Sometimes, if I was being a really good wife, I would have some freshly made bread of our own to put it on. Then send it through the convection over (toaster oven) and get the cheese all bubbly. Mmm, mmm, mmmm!! You just don't know what you are missing! However, Broad Street changed their menu and what was removed?? You guessed it, the pimento cheese. *sigh*
So, we have occasionally found pimento cheese here or there that is ok to even pretty good. But nothing thrilling for the most part. Fresh Market has a jalapeno pimento cheese that is pretty good, but only cold on crackers (my opinion anyway). My mommy makes yummy cheese spread, tends to the sweet side rather than spicy, but tasty nonetheless, but again, we would only eat it cold on crackers.
We have been missing the hot, bubbly, spicy goodness that only Broad Street had.
I have made various pimento cheese spreads over the years, some very good, some ok, some were very tasty but a lot of trouble (you had the cook the sauce that holds the cheese together). Anyway, in my travels on Pinterest, I found a Baked Pimento Cheese spread recipe that sounded not only tasty but it was meant to be the hot, bubbly goodness we are looking for. Its worth a try! 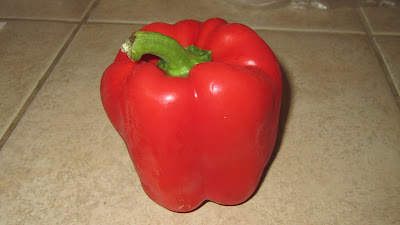 The first thing I had to do was roast my own red pepper. I have done this before, it is messy but not hard.
Slice the red bell pepper in half and remove the majority of the membrane and seeds and cut out the stem. 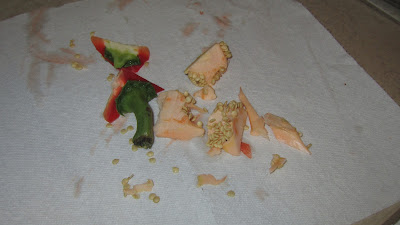 Then you rub the entire surface of the pepper with veggie oil. Do not use olive oil for this, it has a lower smoke/burn point and you will regret it. I am sure there are other oils that would also work, but I used what I had on hand. This is a very slippery business, oiling the pepper. Also, when you are done, you might want to call for help to turn the faucet on, otherwise the mess is then transferred to the handle. I have found a sink filled with warm/hot soapy water is a great thing to have ready during this whole roasting experience. Douse and rub your hands in the sink of water to get the worst of the oil off and then wash your hands as normal. 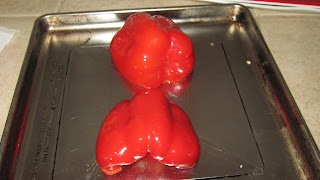 Another thing to note, you do not need a lot of oil. The more oil on the pan the more it will smoke when you roast the pepper. So just be aware of that. You might set your smoke alarm off and scare the pets or children in your house.
After the pepper is oiled and placed on a baking pan, place it under the boiler in your oven. My oven has two choices for the broiler, Lo and High. High made the pan smoke too much (because I was not sensible and used too much oil!) and made my eyes water. (A side note: should I worry that my smoke alarm did NOT go off?? Just wondering.) So I used the Lo setting. I do not know what temperature it was using, but my guess maybe 400? High, I bet, was 500. 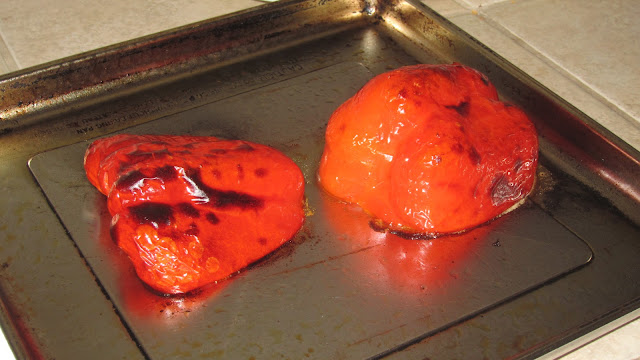 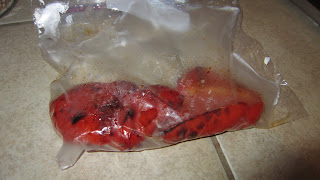 Overall it took between 15 and 30 minutes. You want the skin to be bubbly and blackened in several places.
When you remove the roasted pepper, let it cool only slightly, maybe 1-2 minutes and then transfer to a gallon ziplock bag. Remove the majority of the air and seal shut. It now needs to cool several hours. The more it cools the easier the skins will come off. Peeling is messy. Just know that going in. You will
need paper towel handy and that sink of hot soapy water is nice to have available too. 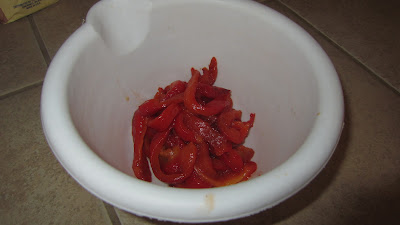 Place the peppers in a regular veggie strainer above a mixing bowl. This lets you catch the juices from the peppers which are full of flavor. The skins should peel off fairly easily, rub them a little if they need loosening. It is not terribly important to get every single bit of skin off, so don't stress about it. After the peppers are peeled, slice them into strips, or mince them if you prefer. Either way is fine.

Once my peppers were peeled and sliced, I added a dash of salt, several dashes of pepper and some mayo. Stirred that around pretty good, and then i whipped out my immersion blender, which is my current most favorite kitchen appliance. I whipped that around to chop up the big pieces of pepper. I didn't think about the color changing. Look at the difference between the before and after pics.

After that I seeded two jalapeno peppers. Then I minced them up in my mini chopper. If I had been thinking ahead, I would have seeded them and put them in the bowl when I used my immersion blender, but nooooo. I was thinking short term and not planning ahead. But, as my mother and grandmother in their cooking wisdom always said, "You're not really cooking unless you dirty every dish in the kitchen." Something like that. 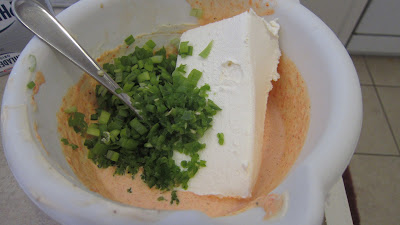 To my mayo and pepper mixture I added a block of cream cheese, the chopped jalapenos, and some chopped green onions, plus a dash of hot pepper flakes from our friends who grew and dried their own. (see the previous blog post). 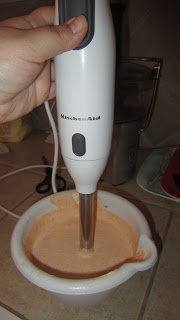 I was trying to mix this with a spoon. It was not going well. So I whipped out my immersion blender again. One of the things I like about it is its versatility and easy clean up. I just stick it under running water or in a sink of soapy water and run it briefly. Rinse, and it is ready to be put away, or used again, as the case may be. But I love the creamy consistency it created with the sauce. 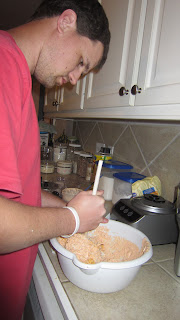 Here is my Eric, working on mixing the freshly shredded cheese, both white cheddar and yellow cheddar with the sauce I made earlier this evening. We went to what is called Swing Into Summer (free food and entertainment every thursday in may in the city of Madison) and that suspended my cooking. Once we were back home (after a quick trip to Wally World) We used my newest toy (a food processor, bought on clearance at Wal-mart) to shred the cheese. Wow! It was SO fast! I did manage to slice the tip of my finger just a bit while disassembling it for cleaning. Oops. I wasn't trying to scrape the last vestiges of cheese off of a sharp blade with my finger, no, of course not! Anyhow, the new toy worked very well, and I was thrilled. Eric had to be in on trying out the new appliance, so it was only fair that he had to do some manual labor as well. 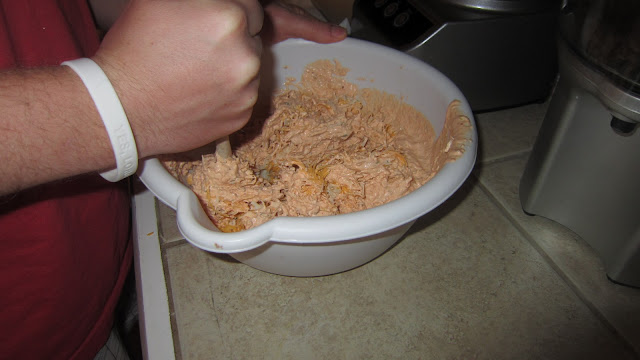 So, as we speak, the cheese spread is in the fridge, letting the flavors marinate overnight. Lunch for tomorrow is calling my name!!
--- 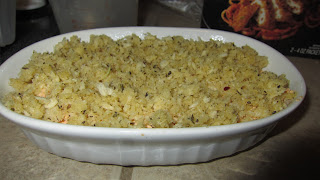 Ok, it is tomorrow! We got up hungry, so I threw some of the cheese spread into a greased small casserole dish. For fun I melted a TB of butter and mixed some Italian seasoned Panko crumbs into it and spread that on the top. Then it was a complete guess as to how long and at what temperature. But, 350 is always a good place to start. 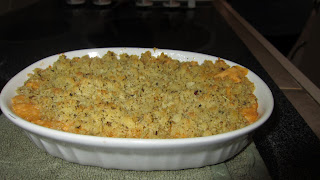 Here it is finished! I would say it took about ten to fifteen minutes to cook through. I watched for the edges of the cheese to be bubbly and the topping just starting to get golden. Doesn't it look good enough to eat?? Oh wait, we did! And let me tell you, it was delicious! Not nearly as spicy as I was thinking it would be. Great flavor though, certainly not bland. Just not nearly as HOT as one would think, considering all the peppers in it. It was also very runny. That did not impact the taste in anyway, but when I make this again, which I am sure we will, I would reduce or even leave out completely the mayo. If you were going to serve it cold, it needs the mayo, if you are going to serve it hot, which this is awesome hot, leave out the mayo for a thicker consistency. We ate this on wheat thins. It would also be good on ritz crackers I would imagine. You could also serve it on toasted baguette slices. It is really good.
The recipe makes a big batch, so I plan to freeze some for future easy meals. The full batch probably would serve 8-10 at least. I'm posting the recipe as it was written, not with the changes I would make, or how I personally did things. Just FYI.
So, this was a long blog post and took me two days to complete. I hope you enjoyed the process. Heck, I hope you even made it to the end!
~Kristina