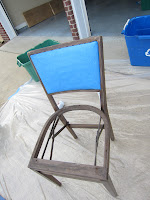 I started with a chair given to me by a friend, who had had a set of four at one point and over the years several had fallen by the wayside. So, knowing I wanted a project chair, she offered it to get a new lease on life. First I unscrewed and removed the seat. The screws were rusted nearly through, so I did end up at Lowes to get new ones before it was over with. I pulled the old cushion and cover off the wooden seat, and taped off the back cushion to protect it from the spray paint I was about to use. 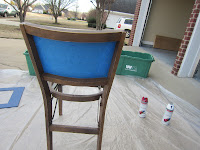 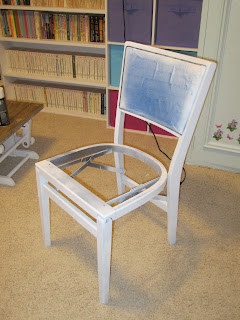 I used white satin finish spray paint. It took two coats to cover it well, and I had to turn the chair upside down and this way and that way to get all the crevices. 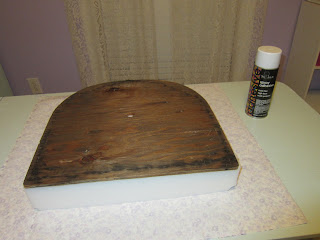 I cut a square of cotton material, backed with iron on interfacing, 4" wider than the seat on all sides. I used permanent spray adhesive to adhere the cushion to the wooden seat. Stuff stinks to high heaven, but worked well. 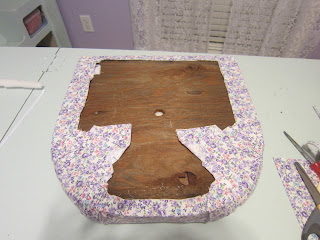 I had to borrow a friends staple gun to fasten the material to the seat. I started at the front side of the seat and stapled it twice close together. Then i went to the backside of the seat and pulled the material tight and stapled three places along the backside. Then I went to the right and left sides, pulling the fabric taut as I went. The curved corners at the back of the seat were the most tricky, and quite frankly, I did not know what I was doing. I just winged it! 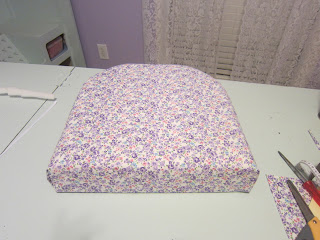 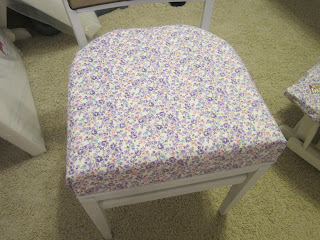 Then I turned the chair over and used my nice new shiny screws to fasten the seat in place again. 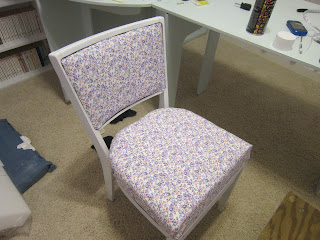 It was tricky to cover the back of the seat, more so than I thought it would be. Spray adhesive and a few tries later I got the back recovered as well. The edges needed something to finish them off. The back was not too bad as it was, but the front needed a finishing touch. 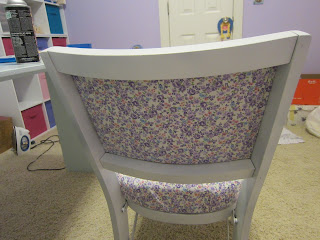 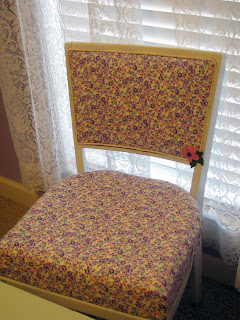 I finally found some ecru cording to hot glue around the edges. What I didn't realize is that when I cut the cording, which was twisted, it untwisted! Ahhh!! So try as i might it wouldnt curl back around as it was. That left the bottom right corner looking odd. So, after some contemplating, I found a felt scrapbooking flower & leaf and a cute little button, then add a dab of hot glue & viola! 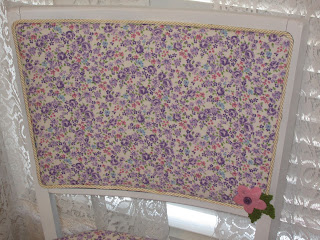 It was a cute addition and no one would know it wasn't on purpose, so SHHHH!!!