I adore baked beans. Bops (local frozen yogurt place) has some amazingly delicious baked beans. We had three groupons/living social deals for there, and that is when I discovered they had more than yogurt, and their food is quite tasty! Each time I got a cheeseburger and a side of baked beans. I would purr over both items the whole time I was eating. So after the second time, I had Eric ask if they sold their beans as a stand alone item. The lady said she would, but she had to look up a price. It was $3.25 for a pint. SOLD! I got several meals off that pint of baked beans and purred everytime. Several weeks later we went back to use another groupon and again I asked to buy a pint of the beans to take home. This time they only charged $1.62! LOL I was not going to complain. I enjoyed that pint as well. Who knew baked beans could make me so happy?
Anyway, in the interest of a healthier option, I decided I would make my own baked beans. I have made my own baked beans in the past, and only used ketchup, brown sugar and vinegar, with a dash of black pepper and chili powder. Those I always enjoyed, but they needed something more. So I did some reading up on baked beans, the different kinds, how they vary by region of the country. I also did some looking into BBQ recipes, and I found many similarities. Sweeter in the southeast, spicier in the south and west, thinner and tangier in the north.
All the recipes had a tomato base (with a couple exceptions). Either ketchup or tomato sauce or tomatoes themselves. Then something to make things sweeter, brown sugar, honey, molasses, and less frequently- white sugar. A very few recipes ignored the sweet all-together, but the vast majority had at least some. Then you have some sort of souring agent, such as vinegar or mustard. There are many choices in vinegar. Apple Cider, White, Red Wine, Garlic Red Wine, etc. Most baked bean recipes called for bacon or pork of some sort, meat to add flavor, you see ham hock called for often. Ill admit, I dont know what a ham hock is, and I was not going to buy one! lol More than once recipe called for veggies, onions or green peppers were most common.
So using all the information I had gleaned, I wrote out a recipe to give myself some guidelines, and ran with it.
I got a little bit excited and cooked WAY too many beans, but I will freeze some for future use. I had 8 Cups of cooked beans when I was done. LOL. I used half, and I have the other half ready to go in the freezer. 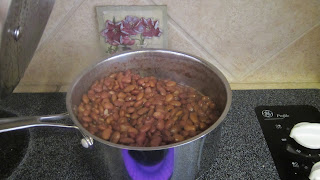 I soaked the dried beans overnight last night, drained and rinsed them today and set them to cook. It took about two hours, and they were soft enough to eat, but not as soft as I would normally make them for eating, but I knew I would be cooking them more with the baked bean sauce on them. I took them off the heat and covered them while I sauted some onions, garlic and bacon in olive oil. 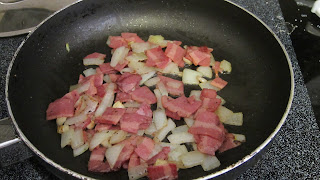 While the onions et all cooked, I mixed up the sauce itself. Ketchup, brown sugar, mustard, honey, Worcestershire sauce, chili powder, and black pepper. 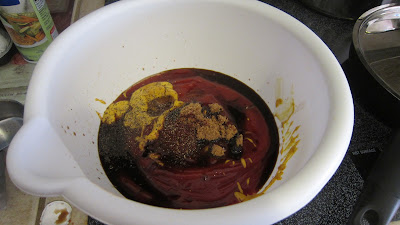 Once the onions etc were all cooked, I scraped the skillet contents into the sauce bowl and mixed it all up.
After some sniff testing, I added more honey, brown sugar and Worcestershire sauce. A few more sniffs and I added a dash more black pepper. I was pleased with the smell, and decided to go with it. 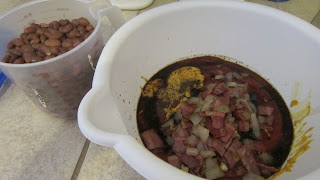 I am not a fan of big chunks of onions and bacon in my baked beans, so I pulled out my immersion blender and whipped it smooth. I missed a few bacon chunks but overall it helped the consistency alot.


Then I put the sauce and beans in my crockpot and turned it on high (because I am NOT a patient person). I kept going back and checking and stirring and thinking, man this is taking forever! About an hour later I realized- I had never plugged the crockpot in!! *facepalm

So, it was then another hour on high before it was hot enough, and I was hungry enough, that I dipped myself a bowl to try. 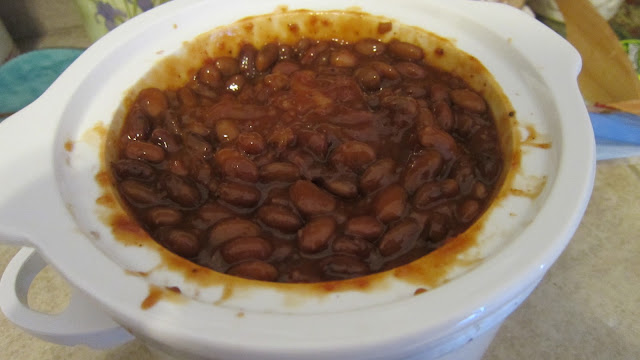 OH MY WORD. Deliciousness!!
This might be a northern thing, or maybe it was a Winner family thing, but since childhood, I always eat my baked beans with potato chips. The crisp crunch with the sweet mush of the beans, the salty of the chips with the sweet spiciness of the sauce. I LOVE the combination! Try it sometime. Seriously.
OK, so enough of my rambles, below you will find the recipe. Tailor it to suit yourselves! Let me know if you try it though. I would LOVE some feedback!

Directions:
Soak Beans overnight in cold water, covered. Drain and rinse. Place in sauce pan, cover with water. Add salt. Stir. Cook on High until boiling. Reduce heat and simmer for 2 hours, or until beans are soft enough to eat, but not mushy. Stir approximately every half-hour, check tenderness after 1 hour and about every 15 minutes after that until done. Add water as needed to keep beans covered.
When beans are done, remove from heat and cover to retain moisture. Saute minced onion, olive oil, bacon and garlic in skillet until onions are tender and bacon is cooked.
In mixing bowl combine remaining ingredients and add contents of skillet. Mix well. I used my immersion blender to chop up the bacon and onions and garlic. I did not get all the bacon pieces. That is optional.
Drain beans and place in crock pot. Add sauce mixture. Stir well and cook on high until bubbly and heated through, stirring frequently.
Posted by Unknown at 8:48 PM