We adopted Rascal and Teddi in August of 2010 from MARL. They were strays from our neighborhood at the time, and very sweet dogs that needed some love. We had been debating about adopting them, and then they were picked up by the animal control officer. We didn't know this and after several days of not seeing them, we went to MARL and sure enough, there they were. So we waited for the week to pass for them to be considered strays and then paid the money and adopted them officially. They have been great additions to our already crazy life.
Then in October of 2011, we added Audrey to our dog pack. She was the pet of a family member who could no longer care for her, so we took her in. Overall, she has settled in smoothly and all three dogs adore each other. 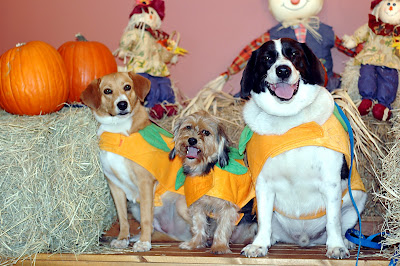 Now and then Eric and I look at each other and say "We have three dogs" and just shake our heads. I still say it is proof that God has a sense of humor.
But I wouldn't trade them for anything!