Just a quick post this evening folks! These cookies are da bomb. Seriously. Besides being super easy as well. I know it may sound a tad strange but, take my word for it, cake batter flavored cookies are amazing!
I will also say, you cannot eat just one. Not possible. So take precautions. Give some away promptly or you will eat, like, the whole batch! Or at least enough to make yourself sick later. Nobody wants that. So, be prepared to share!

I have to say, I was not prepared and there are no pics, which is very sad. Regardless, these are delicious.

Too easy, right? YES! But that is the magic of these cookies. Dump everything in a bowl, except the spinkles. Mix til well blended. Dump in the sprinkles and stir just enough to mix them through. Scoop and roll into 1" balls and bake. Easy peasy.

So go make some!

Oh, and this is one cookie that is actually better cooled. Who knew??

Directions:
Mix all ingredients except sprinkles in a bowl until well blended. Add sprinkles and stir just enough to distribute the sprinkles through the dough. Scoop and roll dough into 1” balls. These do spread, so don't put them too close together. I was getting about 20 cookies on a cookie sheet. Bake @350 for about 10 minutes. Until slightly cracked and just a hint of golden along the edges. Do not over bake! Err to the side of under-baked. Let sit on cookie sheet for 3-5 minutes and then transfer to cooling rack. This is one cookie that is better when cool.
Posted by Unknown at 10:19 PM No comments:

Peppers of various sizes and in various stages of ripeness.  They called to me. What to do with them? Some we have used on sandwiches, but beyond that, uses for peppers escaped me. Now the occasional jalapeno in a cold cheese spread my family loves, yea I could do that, but what to do with the variety in front of me? Experiment of course!!
I had noticed several recipes go by on pinterest about a variety of cheese spreads. A lot of them included things like sausage or spices I was not a huge fan of.  I didn't see any reason to not just try my own.
So I pulled out a block of cream cheese and a partial block of extra sharp white cheddar cheese. A partial loaf of french bread. A pile of fresh peppers from my husband's garden. Also grabbed my pepper grinder and some parsley. 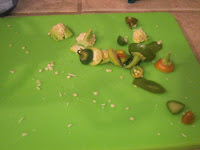 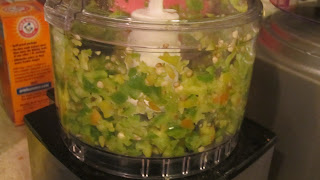 The first thing to do was to cut up the peppers. I used three small jalapenos that were turning reddish orange. I had one large jalapeno that was crisp and green. I had two small fresno chili peppers. There were several other peppers but since I was not sure what they were, so I did not use them this time. I cut off the stems and any rough spots. I then cut them in half. The smaller half I cut roughly into 4ths. The top half, the thicker half, I cut open and took out the center part where the seeds live. The littler jalapenos I left all the seeds in, since there were not very many anyhow. The seeds and membranes inside the peppers give them their 'hotness'. You can control the heat of any pepper recipe by controlling the seeds and membranes from the inside. I then placed the roughly chopped peppers in my mini chopper and minced them very finely. 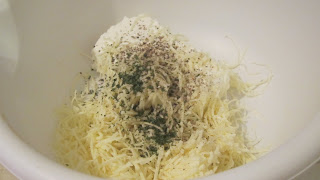 I used my new food processer to shred the partial block of extra sharp white cheddar. About 4oz of the cheddar. I added that to the bowl where the cream cheese had been softening. I added about 1 tsp of freshly grated black pepper and about 1 tsp of dried parsley. 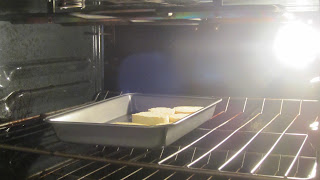 I sliced about 6 slices of the french loaf and then placed them in a pan and into the pre-heated oven. I toasted them, turning after about 5 minutes. They need to be slightly golden and crispy, without being hard. I keep my bread in the fridge during the summer months in Mississippi to lengthen shelf life, so it took longer than it would have if the bread had been room temperature. 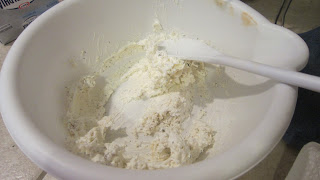 I mashed and stirred the cheese and spice mixture. 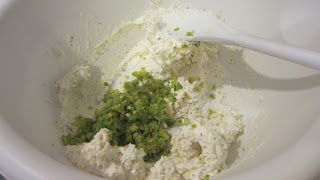 Then I added the minced peppers. Word to the wise, wash wash wash your hands after dealing with peppers. Even after one wash you can still make your eyes or lips burn if you touch them.
I added a generous amount of the cheese mixture to each bread slice. I was majorly starving, since lunch was cottage cheese and grapes. I then toasted the slices in the oven for about 10 minutes. The cheese doesn't really melt, or at least you don't want to leave it in that long. You can tell when it is hot, the look of it changes. I can't explain it better than that. 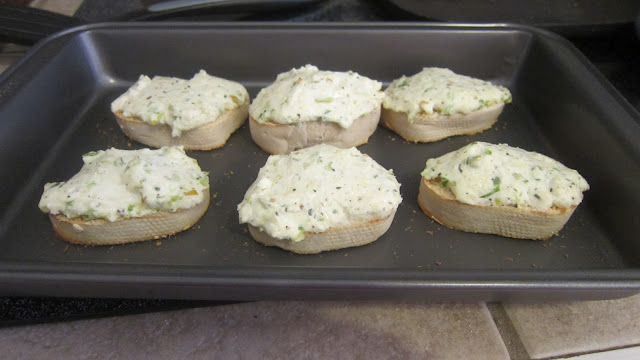 I have to say this turned out SO good. Talk about flavor! It was hot, temperature wise, it was also pleasingly spicy hot. Not too much, but a small after-burn. I love how cream cheese is melty and creamy, and the tang of the white cheddar was so good too! The fresno and jalapeno peppers added some fabulous flavor besides the spice. The blend of flavors was incredible.
On a side note, I attempted something similar a few weeks ago, and while we enjoyed it, this is WAY better. The last time I only used jalapeno's and I had 5 BIG peppers then. I didn't add any other cheese to the cream cheese either. It was too much pepper and not enough cheese. It didn't have the flavor this did. If you try this, you definitely NEED the white cheddar. I also think the parsley and black pepper really brought out the flavor of the peppers and cheeses. You could change it up with say, dill or basil instead of parsley. I am all for additions or different versions! Enjoy!

Directions: Mince the peppers, limiting the seeds and interior membranes to suit your family's taste. Shred the white cheddar. Blend the cheeses and spices. Add the peppers and blend well. Toast the french bread slices. Top with cheese mixture and bake @350 for about 10 minutes.
Posted by Unknown at 6:58 PM No comments: