So there are foods in life that can easily be qualified as 'sinful'. Too good for your own good. So lucious that it should just be illegal to eat them. Thankfully, no matter how good something tastes it isn't a sin. For that, we are all eternally grateful. Eat at your own risk to your weight, and your own risk to addiction. Because this is just that good. Considering that I had no base recipe to start out with and just kinda threw things together, it must be kismet. Destiny. A reason to eat your veggies.
So, what is this delicious creation you ask?
It is warm creamy sweet cinnamon goodness. It is cheesecake with brown sugar and butter instead of a crust. It is melt-in-your mouth sinful goodness. OK, so not sinful, as we established, but definitely not something we should make very often.
So here is what happened. I found on pinterest a pin for nutella/cream cheese pastries. (another blog for another day!) It called for a tube of crescent rolls, and knowing I had two tins of Pillsbury items in the fridge, I thought one of them was crescent rolls. No such luck. So, I was in the mood for something sweet and unhealthy, so I grabbed some familiar and tasty ingredients and decided to experiment.
First, one of the tubes of items I did have was cinnamon rolls. Ahh cinnamon. I adore cinnamon in desserts. So, that is where I was going to start.
Next, I saw a block of cream cheese. I love how versatile cream cheese is. Add some cheddar and jalapenos and you can make it savory and awesome. Add instead some vanilla and sugar and you are on your way to creamy dessert territory.
I also grabbed an egg, a stick of butter, and my trusty bottle of vanilla. Placed everything on the counter next to my containers of sugar. Found a reasonable sized casserole dish and my handheld blender.
Then I stopped to think. What was my plan??
I decided to not worry and if it flopped it flopped. :)
I melted some butter and mixed in the brown sugar. I poured that into the bottom or my casserole dish. Then I blended up my cream cheese, sugar, vanilla and egg. I realized as I was doing that, this was going to be reminiscent of cheesecake.
I then popped open the cinnamon rolls and cut them each into four pieces. I mixed that through the cheesecake batter and then loaded it all into the casserole dish.
I preheated the oven to 350, since I had to start somewhere, and placed the casserole dish in the oven.
I set the timer to 15 min and unloaded the dishwasher while I waited. Then I loaded the dishwasher. I checked on the casserole several times, and I was starting to get concerned it was never going to bake til almost the end of the time it finally looked like it was baking. I added another 10 min and kept a close eye on things. At the 20 minute mark I realized I needed to cover the dish with foil. I did so, and hoped the middle would eventually look cooked. At 25 min, it was very close. I took it out of the oven at the 28 min mark. It smelled delicious. I heard Eric at the backdoor and was pleased with my timing. 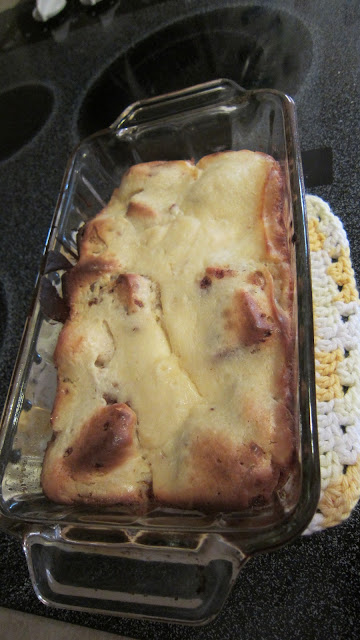 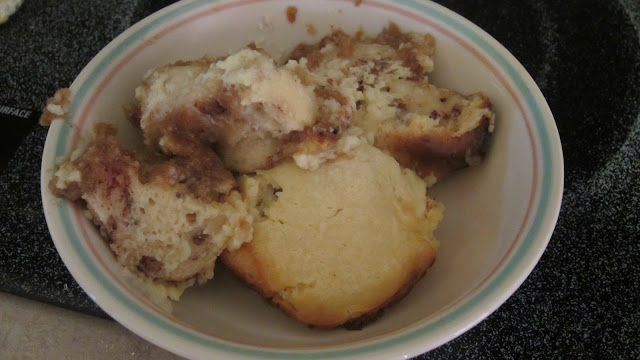 It was a heavenly combination of cheesecake and cinnamon roll. I could have drizzled the icing from the cinnamon roll tube on top, just to add to the sugar rush, but I didn't. It didn't need it, but it would be optional.
I was worried the cinnamon roll pieces would never get cooked, but they were! It was soft and creamy and delicious. I would say it could serve 3-4. This was the small size cinnamon roll tube.

Eric said the taste was somewhat familiar. I think it has almost a creme brulee sort of flavor.

"Just what I wanted after a long day at work." ~Eric.