Pasta and I have a love hate relationship. I love a good pasta dish, but making a red sauce/marinara sauce to suit me has just not worked. Now, Eric would be satisfied, but I wouldn't be. It would be lacking something flavorwise, or be too seasoned but not tomato-y enough. I just couldn't find a mix that really suited me. We even went back to jar pasta sauce. *gasp* Even then, some I would enjoy, some were too plain. Some were too strong in some flavor but not enough of others. And round and round we go.
I adore Olive Garden's 5 Cheese Ziti Al Forno. Oh my gosh. Heaven on a plate. Even better brought home and rewarmed as left overs. If there is any left to bring home. Sometimes that takes more will-power that I posses. Don't judge.
So, I have cruised sauce recipes on many websites. Read them over, thought them through, tried them and then been disappointed. Pasta sauce and I have a relationship much like I have with pancakes, but I digress.
In my time on pinterest, I ran across a skillet lasagne recipe that sounded quite yummy. So, since I have time on Saturdays while Eric is at work to experiment, I figured I would give it a whirl. It was all ingredients I had on hand, so worst case scenario, I scrap it all and have a PB sandwich!
Even as fabulous as a recipe can be, I cannot make something with a few changes. It is in my genetics I think, everything must be tailored in some way. Normally that leads to delicious surprises. On occasion it has not turned out well, but those cases are few and far between.
Let me tell you what I did, and those things I would do differently if I make this again, which I hope to very soon! 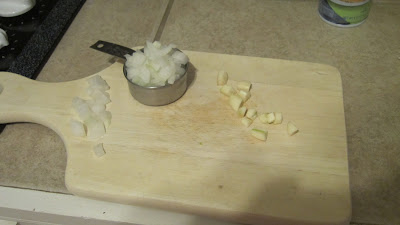 First I diced some white onion. The recipe called for 1/4 C. As you can see, I got a tad over-excited and diced too much, but I hated to put just a bit in the fridge, so I used more than it called for.
I chopped 3 cloves of garlic, but they were all small ones. I personally think I could have had another one or two. However, if you had more potent garlic, three would be sufficient. 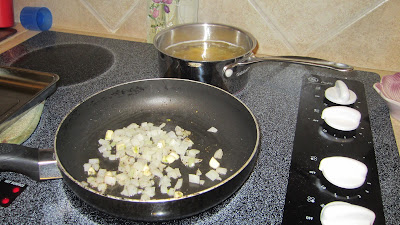 I sauted the onions and garlic in olive oil just til the onions started turning translucent. Oh it smelled SO good! In the meantime, I was boiling the lasange noodles, have broken them into pieces, per the directions. 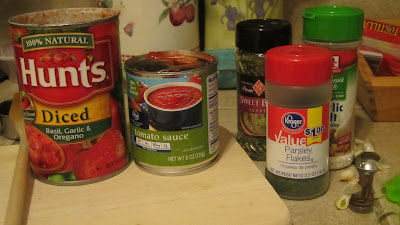 I had the diced tomatoes and tomato sauce cans on hand, so I used those. The original recipe called for stewed tomatoes I believe. I added parsley, sweet basil, garlic salt, & black pepper (not pictured). 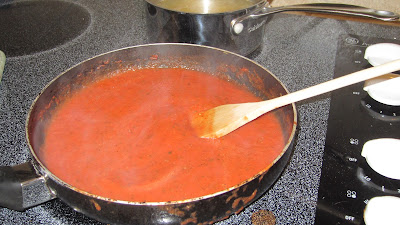 I put the diced tomatoes, tomato sauce, and spices in the skillet with the onions and garlic. I stirred it and let it cook til it was heated through and fragrant.
I removed it from the heat temporarily, and dumped the contents of the skillet into a large measuring cup (4 cup size) and used my immersion blender to smooth the consistency out. I am not a big fan of lumpy pasta sauce. I prefer creamy and thick. This is personal preference, if you like the chunky style, by all means, leave it chunky! If you are weird that way and all.
I returned the sauce to the skillet and continued to cook it, and then added the noodles. I cooked it maybe another 10 minutes, stirring nearly constantly, because the red sauce will pop and spatter otherwise. When the sauce thickened to the consistency I desired, I added the shredded cheese. 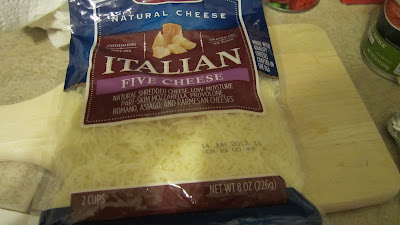 The original recipe called for 1/2 C ricotta and 1/2 C shredded Mozzarella. I didn't have the ricotta on hand, and I prefer the italian blend over plan Mozzarella anyway. I used between 3/4 C and 1 C. I just dumped a handful or two in the sauce until I thought it looked like enough. I like exact measurements like that. 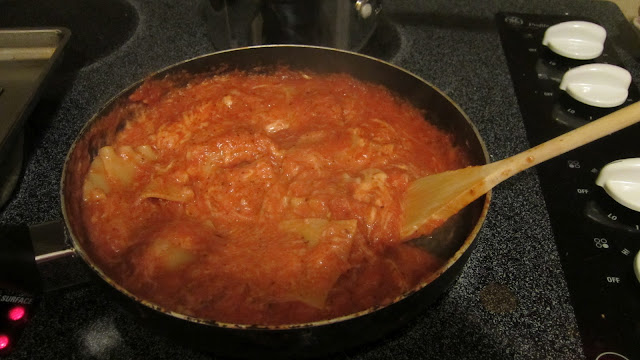 Here it is, in its final stages of cooking, just enough to melt the cheese. Then I removed it from the heat and dipped up my share. That is when I first realized that the noodles were going to be a problem. The kept sliding off my spoon while trying to dip them into my bowl. Then as I was eating, it became more of an issue. Lets just say, I am glad someone invented Shout.
So, while it was especially pleasing and delicious to my tastebuds, when I could get a mouthful to my mouth without it sliding either back into the bowl or onto my shirt that is, I will NEVER be using lasagne noodles for this again! Some rotini or small shells, or even bowtie pasta would all be better suited to this recipe.
If I didn't make this abundantly clear, this sauce is phenomenal!! It was a great blend of tomato goodness and seasonings and garlic and onions. Oh my! Major success! It was also even BETTER the next day, as is the case with most pasta sauces. I just purred over the sauce the second day. Other than the stupid noodles not behaving and being willing to be eaten, this was a total success as far as I am concerned.
Eric did not partake of this dish, but I did allow him to sniff the sauce and he said it smelled delicious. So, next time, I MIGHT share some. Maybe. Possibly. Is that part of the vows I said? Love, Honor, Cherish and share my heavenly pasta? This requires more thought.

Directions:
Heat oil in a large nonstick skillet over medium-high heat. Add onions and cook until softened, about 4 minutes. Add garlic and cook until garlic is fragrant, about two minutes. Add in diced tomatoes, tomato sauce, and seasonings. Cook mixture until it thickens up a bit, around 5 minutes. Add noodles to skillet and stir into the mixture well. Cook about 10 minutes or until mixture is the thickness you desire. Add in mozzarella. Cook about 2 more minutes, or until mixture is heated thru. Top with parmesan.
Serve immediately.
Posted by Unknown at 10:44 PM